Mac Tonic is one of the annoying potentially unwanted programs (PUP)[1] that pretend to be useful system optimization tools. Developed in India, this fraudulent Mac cleaner usually sneaks into the system unnoticed. Immediately it starts scanning the system looking for various security, privacy or system-related problems. The purpose of the PUP is to make you believe that your Mac OS X laptop or computer needs professional help to fix the device. However, it’s a paid service. Should you pay for it? Absolutely not! Mac Tonic barely gives true scan results. Indian developers only want to trick inexperienced computer users into spending a couple of dollars for useless program’s license. 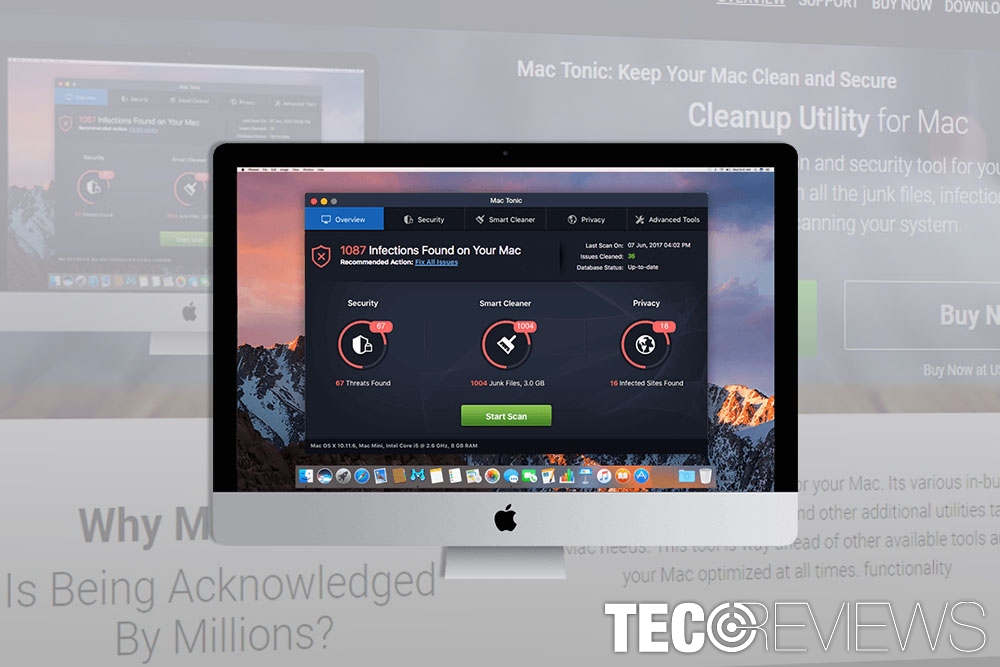 The legitimate service operators noted in their website about a shady activity of so-called Mac Tonic virus:

WARNING: There’s a malicious “cleanup” app from India floating around called “Mac Tonic” (mactonic.net). This is NOT our product, and we are making every effort to resolve this identity confusion. If you’re one of many innocent victims of this software, please report mactonic.net to GoDaddy and/or your preferred review site. Thanks.

Developers of Mac Tonic use three methods to spread their shady application:

These are typical PUP distribution methods ever computer users should be aware of. They allow entering the machines unnoticed by tricking a user into downloading misleading components.

Due to the sneaky and silent infiltration, this program is often referred to as Mac Tonic virus. We want to point out that it’s not a correct term to describe it. It’s only a potentially unwanted program that cannot damage your Mac. However, it should not be kept on the system.

The official website lies about benefits of the Mac cleanup utility 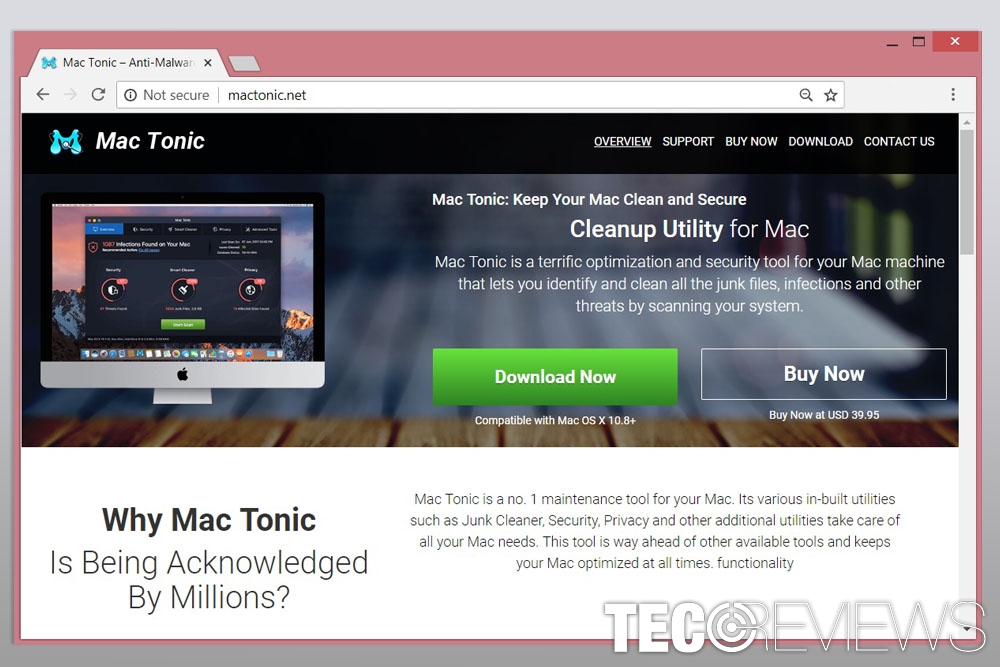 If you are looking for a Mac optimization or cleanup software, you may have encountered mactonic.net website. The official website is often a benefit. It gives a sense of credibility and might encourage to download shady tool.

Developers put lots of lies on the official website, such as claiming to be a number one maintenance tool for Mac. They also stress out the advantages of the system optimization tool:

Mac Tonic is a terrific optimization and security tool for your Mac machine that lets you identify and clean all the junk files, infections and other threats by scanning your system.

However, downloading and paying 39.99 USD for the program is just a waste of money. If you really need a Mac optimization tool to clean up your Mac, you should continue looking up for a legitimate software.[4]

The main distribution method of the so-called Mac Tonic virus is fake Adobe Flash Player[5] and Adobe Shockwave updates. Thus, you should be very careful with them.

Keep in mind that legitimate updates are available on the official Adobe website or pop-up on the computer’s screen in a program window. All other pop-ups asking to install updates are fake and spread PUPs or malware.

Software bundling is a legitimate, but sneaky marketing method. Any free program you download from the Internet might include additional components, such as PC optimization tools, antivirus, browser extensions, and many other apps that might seem useful.

However, this software marketing method is very popular among developers of PUPs. Mac Tonic program is not an option. This app has been noticed spreading with various free programs, such as PDF converters, video players, graphic design programs.

Downloading and installing freeware requires paying attention. Using questionable sources and just clicking “Next” button without reading notifications is the straight way to install crapware[3] on your machine. When downloading software, you should follow these security tips:

Using the name of legitimate computer repair service helps to create a credible and reliable image of the program. However, security experts note that unexpectedly appeared programs cannot be trusted. 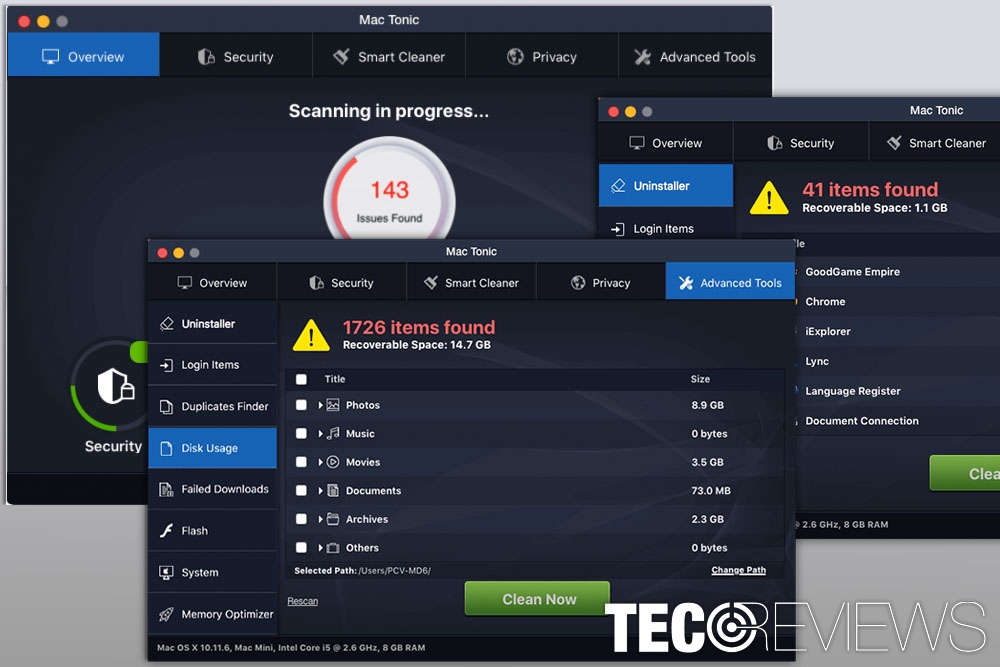 Once the system scan is over, this Mac ptimization utility shows thousands of detected issues.

Once inside, this app adds the corresponding object to login items in order to boot every time when a user turns on Mac. The program is designed to start a system scan immediately. Thus, it starts looking for:

There is no doubt that these are the main features that users expect from PC optimization and cleaning software. But as it was mentioned before, this tool does not operate in the way it is supposed to. All detected problems are fake and used only to scare users into taking some action. In this situation – to pay for Mac cleanup.

The real purpose of the free Mac Tonic program

The free version of fake PC optimization tool is used for promoting the license of Mac Tonic which costs 39.99 USD. Fake system scan results might scare people and encourage them to reach their credit card and buy the license. However, it’s a mistake.

If unexpected system scans or continuously appearing pop-up reminders about computer-related issues bothers you, you should check your computer for PUPs. You can obtain a reliable Mac security software and run a full system scan. Additionally, you can get rid of Mac Tonic manually.

Some tasks related to PUP might be hidden. Follow these steps to ensure correct Mac Tonic removal:

Loading...
Newer Post
How to fix “Server DNS address could not be found” on Google Chrome?
Older Post
Keep your computer protected: best antivirus for students