There are plenty of programs for dealing with malware, hacking, and fraud attempts, along with other similar threats, however, a single PC can only support a limited number of such tools. 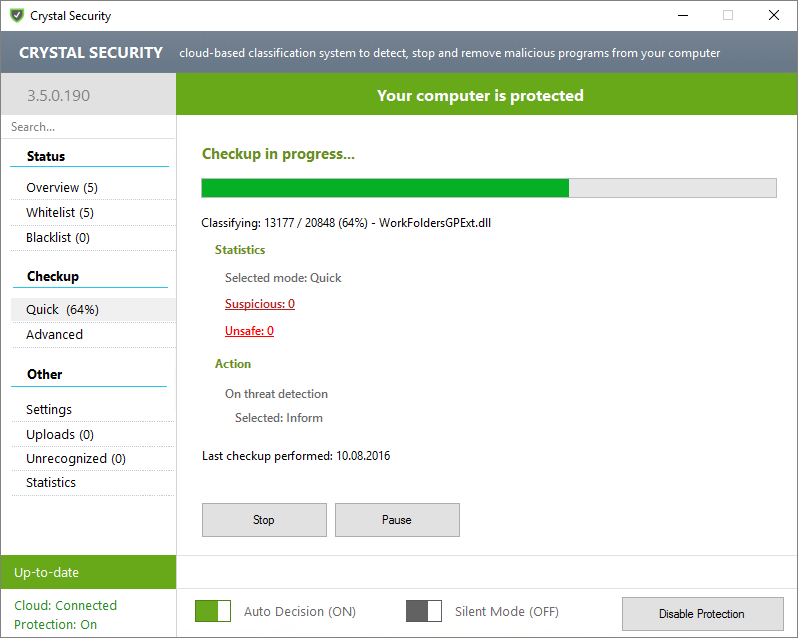 Concurrent anti-virus solutions, for instance, might not get along nicely and do more damage than good and this is the reason for which lighter, cloud-based programs often become more preferred.

Although, There are many options when it comes to cloud-based security solution and Crystel security is one of them.

Crystal Security is known as a cloud-based system that finds and eliminates harmful programs (malware) from your PC. It has the technology to provides quick detection against malware and informs you about the modifications on your PC in real time.

Crystal Security is a user-friendly program which was developed in an effort to help you easily identify and eliminate viruses that may affect your PC.

The cloud-based Crystal Security collects data from an incredible number of participating users systems all over the world to help protect you from the very latest malware and viruses attacks such as 0-day attacks.

Unlike other Antivirus program, crystal security doesn’t come with any price tag for better protection. It’s totally free out of the box, you don’t have to pay anything nor does it include any kind of advertisements.it comes with two editions portable and installable.

These day there’s a new hype in market  “using more then on Antivirus Engine”, Crystal Security also comes with 4 antivirus engines which includes,

The checkup tool works perfectly and in a few minutes you’ll have the results regarding the security status of your COMPUTER. Even though it appears a fairly simple software, Crystal Security will probably amaze you by the way it works.

The Settings tab enables you to set up the checkup mode, along with the conditions where the software sends you notifications. A cool attribute about this application is the capability to upload items automatically, once they’re detected.In setting tab, You can even trigger the shell integration, by enabling it you can analyze any file with Crystal Security.

Anyways those were the features now let’s find out how it performed in malware detection and removable.

Before I start with the results, I would like to tell you how the test was done, We’ve tested it on Intel i5 (4th Gen), 4Gb Ram, on Windows 10 Pro.

The Installation was quick, It takes around 10 min for a full system scan that’s pretty good. After the scan, it made all well-known files as whitelisted for better compatibility.In our malware pack test we’ve thrown 3786 live samples including zero-day threats, Crystal security managed to detect 80% of them (thanks to the 4 different engines).As this is just a malware scanner and doesn’t come with Firewall we’ve skipped Phishing and Web protection test.Throughout our test, we didn’t found any lag or heavy impact on windows beside little lag during the scan in crystal security itself.

Crystal security is updating regularly and getting better day by day and as for the results these are excellent for an application that is meant to add a second line of defence with your existing antivirus software.

How to fix slow File Explorer on Windows 10? 0